Dominant, bold, brave, independent, balanced and intelligent; these are all adjectives of a SRO, positive adjectives but - pay attention - these attributes must be controlled and developed with care and awareness by the owner because if treated differently they can change into a weapon.
If you are interested in a SRO it is very important to search and ask information from a serious breeder about the behavior of the breed. Then perform a self-examination to find out if this breed is the right one for you. The SRO isnt a breed for people who do not have dog-experience; The SRO isnt a breed for people who want a complete submission by their dog  or a person without "character".
The SRO has been created by mankind and was molded by nature with the purpose to have a strong dog to protect the livestock. The trustworthy of a livestock guarding dog towards the animals he protects is very strong, so strong that the dog risks the loss of his life. 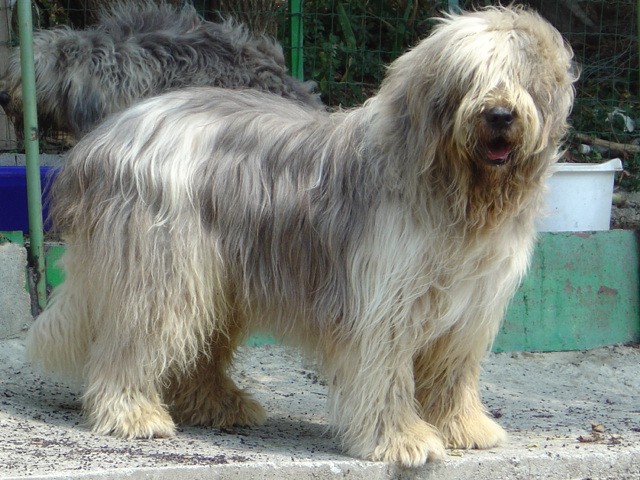 The habitat with its hard conditions has selected the strongest and bravest subjects.
The dogs had to survive with poor resources given by the habitat; he also must be strong and ready enough to fight against predators - and win (two legged predators also).
And even more often a livestock guarding dog didn´t have to fight with a predator but he had to scare the opponents showing an aggressive behavior.
So,  a livestock guarding dog must be capable of changing his behavior, adapting it to different situations; the dog must have the capability to change his behavior without the presence of his owner.
That is why the SROs behavior (and other similar breeds) is so strong and difficult.
If a person is interested in a SRO only for his looks, undervaluing the behavior aspects, he can expect really big problems.
When a SRO is on guard he can be a really aggressive dog. His property is off limit for anyone, also for the people that, only a few minutes before, received a warm welcome by the dog. But this was outside his property and in the presence of his owner...
When a SRO is not on guard he is a quiet and relaxed dog but he deserves respect!
Normally a young SRO is really happy and friendly but when he will be 2-2,5 years old he suddenly becomes more serious.

An adult SRO is a quiet and not a noisy dog; he is a lovely friend.
You can feel a very strange sensation when your SRO is watching you with his invisible look.

A SRO cannot live in a flat but he must not be kept outside only: he needs to have as much contact as possible with his owner.
The training of a SRO has to start very early with care and without mistakes when he is a puppy.
The most important thing to do is SOCIALIZATION: this must start when the dog is a puppy.
When the dog has obtained all his vaccinations and he can go outside (after 12 weeks of age), it is very important to show the dog as much as possible. The puppy must always have positive experiences with people and animals (dogs, cats and others); never set the dog up against other dogs or people.
To socialize a guarding dog does not mean that the dog will be too friendly and will lose his qualities as a guardian; the truth is the opposite: you will have a balanced dog with the capacity to know when to be defensive and when to stay quiet. You must know that even if a SRO is well socialized he will remain a reserved, dominant and independent dog.
Dont allow strange people to touch your SRO without his permission. It is impossible for a stranger to value his invisible look and to estimate if he is willing to be touched. He doesn´t growl and sometimes he can give a warning in the form of a "tooth knock" to show he does not agree.
Because of these qualities the SRO has a reputation to be a dangerous and aggressive dog: this isnt the truth!
I have 3 SROs and one of these is a male with a real strong and dominant behavior. But he has received a good education with a correct socialization which allowed him to come with me around all of Europe for holidays and Dog Shows without problems, ever.
The SRO is a real balanced dog and this has allowed the breed to stay next to the shepherd and work with them for decades.
It is simple: a SRO isnt a dog for anyone!